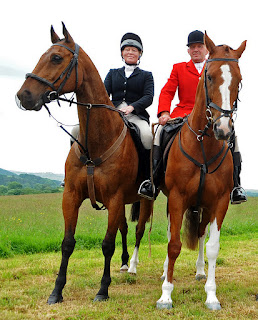 The final day of the 2015-16 point to point season was upon us. The Torrington Farmers Foxhounds meeting held at the North Devon course of Umberleigh, gave six final Yoicks to the season that has seen poor weather, meeting abandonment's, and an Olympian. Give their all to the pointing game.

Clouds bubbled over Umberleigh on a muggy afternoon, to watch the last of the runners try for glory. The first race being the hunts member race putting five runners to post.
Richard Westcott’s Pasternak Jack duly took the race beating Lucy’s Girl in fine style, jockey Heidi Lewis mentioning, ‘He really ran his race well, when I asked him coming up the hill he responded. He has always jumped well.'
The race did get rather untidy, with some of the more inexperienced jockeys not remembering that it  was three times around the North Devon courses and rode finishes past the post mid race. Normality was soon restored and luckily enough the pace allowed the actual finish to be a good one. 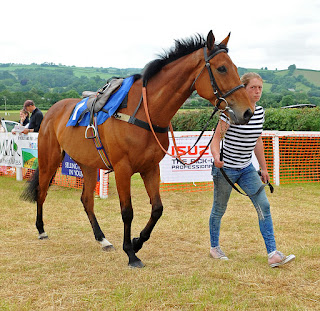 ‘That didn’t really ruin the race, ‘mentioned the winning jockey. ‘But it worked out in my favor, it was good to get to ride a win on the fella. I rode him at the beginning of the season but he didn’t go in the ground. Then I broke my collar bone, to which I have just come back to race riding, and got the call last night to ride him today.’
The jockey who had ridden her first ever winner on the horse last season was thrilled of the chance she got to ride the nine-year-old again, and was delighted that her final ride was a trip to the winners enclosure, especially due to the fact she had been injured mid-season.
A true amateur throughout, who enjoys her hunting and pointing, but now is looking forward to the holidays, and November when it all starts over again.
The restricted race was won by Mrs Jane Wanless’s Jenna’s Pride, in a torrential rain shower. Jockey Alex Edwards in the saddle didn’t think it have effected much as the race went on. ‘The rain really hasn’t effected the good to firm going, only making it a little slippy on the bend. But it is certainly good to firm going.’

The seven-year-old mare beating Chaddersley winner Maryam Jaan seems a big sort of horse, with a bit more to grow into yet, but having run this season seven times already, the mare is surely ready for her summer break. The jockey also mentioned,’ I’m sad to see the season close really, I have had the best season ever at the moment.’
The jockey based with Phillip Riley in Shropshire mentioned that the yard had been going so well with eighteen winners for the season, and for next season the partnership of Edwards and Rowley has some very nice young horse in tow.
The third race of the afternoon, The Men’s Open was won by the veteran of the field, fifteen-year-old Presentandcorrect, ridden by James king and owned and trained by Mr T Sage.
The horse seemed to cope with the inclement weather and changing going, the owner mentioning. ‘We have been waiting for this quicker ground all season with him, he just has not had the going to give him his best chances. I didn’t mind the rain on it beforehand, in fact it probably took the jar out of it a little.’
The horse now who has raced in twelve different racing calendar years seems to still enjoy his hunting and racing and is a firm favorite with his owner. 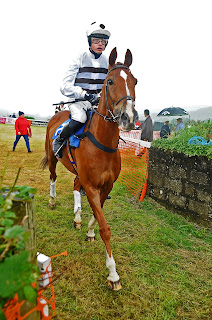 Jockey James King was equally keen on the chestnut grand master saying,’ I almost hit the front too soon on him really, but the ground here was well cared for, so he enjoyed it out there. He loves his pointing and hunting with the Duke of Beauforts.’

The jockey who has had a superb season himself, leading the hunter chase jockey’s championship for a while and finishing second in the Aintree Foxhunters seems to have his summer well mapped out riding throughout under rules, but will soon be back in November to start the pointing game again.

The ladies open six runners went to post, a good pace was set and Carrie Tucker and Right enough a winner a fortnight back at Chaddersley taking the field on during the final circuit.
Bound for Glory ridden by Hannah Lewis keeping up with the pace soon challenged, and from two fences out seemed to be taking the race over.
‘The plan was to hold him up and creep into the lead, which we have done, I thought we may have got there too soon but his mistake at the open ditch has steadied him a bit so we have waited till the last to bring him home.’
The rain as we spoke came down again. The jockey on ten winners for the season, showing concern that the rain could make the going slippy.
The owner/trainer David Fitch-Peyton mentioned his concern that mid-season everything with him had stopped due to poor going and abandonment's. Mentioned,’ the race today was a very competitive race, and it was great to see him winning again, we have dropped him down from hunter chasing to pointing to gain a bit of confidence in him and it was nice to see the plan work.’
The ten-year-old seems to be enjoying his work and as the trainer/owner mentioned may have a few more seasons ahead still if he stays sound.

The penultimate race the Intermediate, five went to post.
Dr A Thomas’s Mr Sawyer who fell at the last at Chaddersley when challenging Flicka’s Witness in the conditions race overcame his blunder to win easily the Intermediate on the last day of the season. ‘It was very much not like him to go to the floor last time out, we came to the last and I just put him into it and we have ended up falling, but today he has jumped so well,’ mentioned Welsh jockey Bradley Gibbs. ‘The ground and course really didn’t suit him today, he wants more of a short flat type of track which Umberleigh is really the opposite, but he’s has pulled out all the stops today and won nicely.’

The jockey mentioned that the season has gone well for the Welshman, with six horses in the yard and thirteen winners in points and Hunter chasing is a tremendous effort, and to finish up with a winner is special.

The final race of the 2015-16 season came in the shape of a well declared open maiden, thirteen going to post, the Jimmy Frost owned Buz Barton winning the race well under the ride from Josh Newman.
Trained by the owner’s wife Nikki Frost the eight-year-old went away nicely at the finish of a good paced contest, the owner more known for his training and riding talents (winning the grand national on Little polvier in 1989) mentioned,’ It’s nice to get a winner, don’t mind where they are, they are hard enough to come by. We have one in the pony race in a minute and they are even harder to get a winner in.’
The horse who came over from Ireland has had time to iron out some issues at home, jockey Josh Newman instrumental in getting the horse right, ‘the pace of the race could of been a little quicker for us really,’ mentioned the jockey. ‘A faster pace would have allowed him to settle a little more, but he has popped out and won well, it was good to finish on a winner.’
Josh on eighteen winners for the season his best season so far said he would of really like to have got to a goal of twenty winners but the last few weeks being rather frustrating, ‘my last winner was on Bank Holiday Monday in April, the horses showing the wear of a long season not running up to their true mark, but my four timer a Fleet was a highlight so all in all not too bad.’’

The horse may look to be a horse that could grow up throughout the summer and come back all the better of a win, and could be one to mark in the note books, the owner and trainer still on a fact finding mission with the gelding.

So, that marked the end of the 2015-16 season, a season that has bought winners, almost rans, abandonment’s and disappointments, and of course sprinkled with a bit of media attention in the shape of an Olympian.

A season to savor the sport showing good attendances throughout, even more people being introduced to the world of point to pointing.
Onto now the end of November when we all start again, but beforehand horses being bought from the sales as trainers clear out their yards for new blood. Hunt qualifying and then the racing.
See you all very soon.
Don’t forget you can view images and read blogs from throughout the season from Cottenham in November to Umberleigh in June at
WWW.MJAYPHOTOGRAPHY.CO.UK
Posted by mjayphotography at 09:34 No comments: