As this years flat season officially draws to it's close. All heads turn to racing under rules. Fontwell park stages a decent, six race card for a dark and damp late October.
The good and the great are starting to get their National Hunt stars revved up and ready, and horses that we all may see in big handicap hurdles and chases now are being seen on the smaller tracks to polish off their pre season training.

The beginning of the week saw the south of the UK in a midst of high pressure, the ground was dry and trainers were waiting for the rain. The night before the meeting it came. Not in bucket loads but enough to see the ground go good to soft,soft in places. And trainers allowing there charges to take their chances 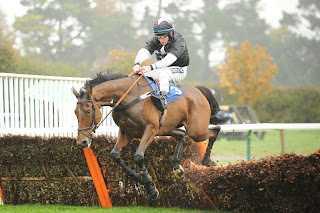 The first race, a two mile one furlong novice hurdle saw eight runners go to post. The favourite Alan Kings Board of Trade going off a well fancied 5/6 fav.
But it was the Harry Whittington trained Bigmartre, who took the honours. The trainer who sent this anxious four year old to post was very happy with the horse who he likes a lot. The gelding by Montamatre was bough by Harry from France on the advice of his bloodstock agent. A quick flight over to see the gelding resulted in him coming home to Lambourn. And is surly a horse now that will be pointed at bigger and better races at places such as Ascot, Newbury or Cheltenham. One to watch i feel.

The first of only two chases on the card, saw only five go to post for two mile three furlong beginners chase. Top trainer Paul Nicholls who rarely sends his charges to the East Sussex course, sent Calipto to post under the steerage of Sam Twiston-Davies. The well attended crowd backed the trainers faith in this five year old gelding and sent off the horse at 8/15Fav. The well fancied runner backed up that faith with an effortless run beating Wadswick Court by five lengths. The jockey reported he was happy to ride horses such as this calibre, and the horse with plenty of speed would have no trouble with two miles, in the soft and the pace therein.


A two Mile five furlong handicap hurdle saw Severn runners take to the tapes. With another top trainer in Grand national winning guvnor Oliver Sherwood  letting Drum Valley take his chances.
The Severn year old off top weight of 11st 2lbs saw claimer Ben Ffrech Davies take 10lbs off this Beat Hollow geldings back. with this we saw the the horse take on and beat favourite Light entrainment by nine lengths. The horse who has run over both sets of obstacles made it a good day for the young rider, who frequents the Fontwell turf often, and now has a two from two 100% record for the Lambourn trainer. Sherwood remarked that the horse is not the biggest so would probably stay at hurdling and has come on well from his ten months on the sidelines running a good second at Sandown last December.

The second and last chase of the day, saw another small field tackle the figure of eight track. Four runners went to post for the two mile five furlong handicap.
Trainer David Bridgwater sent Fergal Mael Duin to post not backing his chances ' he hates the going distance and the changes in direction, everything was wrong for him' Top Fontwell Jockey Tom Cannon on board this top weight soon took the lead of the four, and though the horse did his best to throw the race by jumping right at the last, then hanging the same way up the Fontwell hill, had the beating of trainer in form Harry whittington's Frizzo beating the gelding by five lengths. 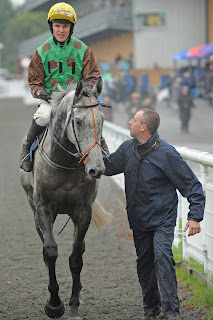 Despite the trainers lack of enthusiasm the punters sent the Severn year old grey off favourite at 8/11.

The final race over obstacles for the day was the two mile three furlong novice hurdle race for conditional riders. Nine runners went to post. 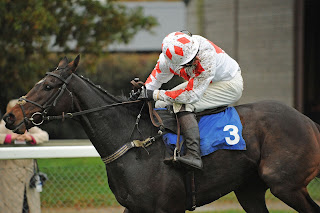 Dainty Diva ridden by three pound claimer Matt Griffiths was sent off a 3/1 fav took the lead easily two from home, and despite hanging over the last won the race with ease by six lengths from Al Guwair.
Trainer Jeremy Scott said he was thrilled with the horse as he fancied her chances in a race he thought was not the greatest of contests. The mare ran at the course in June,unseated Griffiths and as a result took a nasty injury caused by the reins getting caught around the front legs, stripping the mares hair and causing a deep injury. A good lay off,top treatment saw this Severn year old gain confidence, Scott mentioning that she could do with half a mile less in the future.

The sixth and final race of the afternoon a two mile one furlong National Hunt flat race. Saw the brotherly pairing, who did so well last meeting at Fontwell Harry and Dan Skelton take the spoils.

Late Night Lily, in only her second outing, progressed on well from her debut at Southwell at the beginning of the year. The four year old filly by Midnight Legend who is an obvious mud lover took up the running with three furlongs to go and looked untroubled beating Midnight Tune by eight lengths, and would be one on a lowly track to take note of when out in the mud again.

Posted by mjayphotography at 10:47 No comments: