TROPICIAL FONTWELL HAS EIGHT ON THE CARD

Fontwell park racecourse, scheduled their 'Ladies Day' and hoped to be engulfed in late summer sun, but rain,thunderstorms and humitity threw itself at the West Sussex racecourse.
A good eight race card, and the ladies of West Sussex were at their best
Early season, and trainers put their charges into action. Some for the first time,some who have started the National Hunt game a little earlier. But no horse looked poor in coat or stature.
The ground at the Sussex course was good to soft, with all jockeys coming into the weighting room saying this was perfect jumping ground. Which is needed for this tight,figure of eight course.


Trainer Gary Moore,whose family is a very strong addition to the racing industry,not only in training,but with both sons and daughters strong in the saddle in both discipline's. Gave Jockey Tom Cannon the leg up on this four year old gelding by See the Stars. And duly went up the Fontwell hill a length and a half to claim the £2477.00 prize money.
Cannon came off saying the horse had improved well from his run at Worcester over the same distance finishing third in July.


No Nation Hunt race meeting would be complete without the addition to the popular Yellow and green colours of John.P. McManus. And so be it at Fontwell.
Trainer Jonjo O'Neill,who trains at the home of the jumps game at Cheltenham sent to post I'dliketheoption, for this 2 m 1 f novices hurdle. Top weight Antony again trained by the formidable Gary Moore found his top weight of 11st 5 lbs just too much for the inclined finish and a 1 lbs difference between horses found this four year old by Presenting get up to win by a neck.


Jockey Richie McLeron said the ground was perfect to race on. A good covering of grass, and the earlier rain made this perfect going. and also making his poor performance at Bangor last month even more of a mystery to the McManus team

The first race over fences for the afternoon, The Aviator bar and resturant Bongnor Regis Handicap Steeplechase over  2m 4 f saw only four runners go to post. The rails not really making their minds up who the favorite for the race was, it was Marie Des Anges Trained by Anthony Honyball and ridden by amatuer Mr D Noonan who rode his 7 lbs clain well off the handicap weight of 11st 11 lbs.
With two upsides coming to the second last. Formal Bid ridden by another claimer James Banks took to the ground, this left the seven year old well clear of rival Try Catch Me by a distance, who tried but could'nt.
Jockey Mr Noonan, who had a fair good set of point to point rides and winners last season has no plans at present to take the step foward into the professional market, but would not put it out of the question for the future.


The name of Scudamore and pipe has been senominous within the jumps fixture throughout the years. Now the next generation, David and Tom work together to hopefully dominate the winter racing game.
For 'N' Against went to post  for the  2m 4 f handicap hurdle, and from the home turn looked like a true contender for a big race within the season.The 3/1 shot, six year old won by a comfortable distance from the Aidan Cloeman ridden Skint, and looks a true contender. The horse not having an outing since a second place run at Exeter in March looked to take his break well.

Sylvan Legend, trained in Umpley Stoke by Neil Mulholland  and ridden by Mark Quinlan went to post with nine other contenders  for the second of the two races over the fences in the afternoon.
The seven year old by Midnight Legend off the weight of  10 st 1 lbs got up in the final 100 yrd to beat The wee midget by one and a half lengths, making his 3 lb drop in weight from his previuos Newton Abbott fourth tell.
Quinlan, who is in the yard of Mulholland most days, reports all horses well and an increase in contenders coming out from the yard, which can only be a blessing for both trainer and jockey in the current climate.

Two divisions of the £50 Welcome bonus at Racebets.com Handicap Hurdle over 2 m 3 f saw Gary Moore trainer, take his tally of the afternnoon to three winners.
Osgood off top weight 11 st 12 lbs and the price of 20/1 took division 1 by three lenghts. Jockey George Gorman making his 10 lbs claim beat the handicapper, holding on from the second last hurdle. 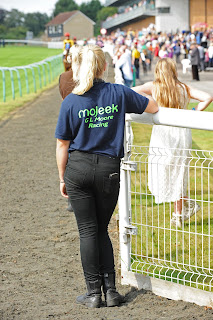 Shalianzi, gave the Horsham based trainer his third winner of the afteroon as the five year old gelding took  division two of the handicap hurdle by 16 lengths at the price of  10/1.
The horses last run was on the flat at Windsor in July and ridden by none other than recently retired Richard Hughes finishing on that occasion fifth of a six runner field.

The eighth race of the afternoon, a 2 m 1 f national hnt flat race went to Nicely Indeed. Ridden by 7 lbs claimer Mikey Hamill and trained in Lambourn by Seamus Durack. The five year old running his first race under rules previuosly running point to points, last time unseating his rider. Hamill taking his mount up in the closing stages to beat 11/10 favorite Amirr by three lengths.

Images of the afternoon can be seen at
WWW.MJAYPHOTOGRAPHY.CO.UK

Posted by mjayphotography at 02:21 No comments: