Quality racing in late May at the Royal Berkshire course. Seven races, top quality action and a good size attendance saw a listed race in the Weatherbys private bank leisure stakes for three year olds plus over six furlongs, and the first of the Windsor sprint series races, again over six furlongs.

The first race of the seven, a two-year-old novices stakes went to the 2/1 fav of the contest Barrington.
Trained by Charlie Hills ridden by Daryll Holland the two-year-old colt by Cassamento out of an Exceed and Excel mare made light work of the Windsor straight from the final furlong beating Eve Johnson Houghton’s Super Julius by six lengths.
The jockey mentioned that the colt would deserve a run at Royal Ascot on his form.
The horse named after the trainers father the great Barry Hills commented,’ He has time to spare now before the Royal meeting, so that could be a possibility, he is a very nice improving sort we like him a lot.’
A possible Windsor Castle stakes contender maybe in the making on the first day I think. The only other option would be the Norfolk, a group two race, if going for this the trainer would really like this improving sprinter.

The maiden six furlong race for three year olds was won by the William Jarvis trained Cold Snap, ridden by Robert Havlin. The horse originally trained by the by James Toller, who handed in his training licence at the end of last season, finding it hard to continue viably with a small string in Newmarket beat the favorite He’s my Cracker trained by the inform Clive Cox by three quarters of a length. 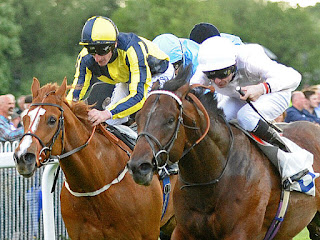 The jockey mentioned, ‘he traveled really nicely, at Lingfield he was very green and this horse has  learnt each time he steps on the racecourse.’
The three-year-old by Medicean is looking like a horse that that will be a very nice handicapper when his schooling is complete, and is one that the trainer likes.
‘He is a very nice horse,’ mentioned William Jarvis who paid tribute to the training of the colt as a two-year-old by James Toller.’ James trained his as a two-year-old and looked after him, so he could come out as a nice three-year-old. If his mind stays right he may make more than a handicapper, but we will see but he is a pleasure to have in the yard.’
One of the longest serving trainers to come out of Flat Racings H.Q is certainly not one to get light headed too soon with his charges, mentioning ‘we must look forward into the future, not at the past,’ which would be code for wait and see with this three-year-old.

The third race of the evening a mile handicap for three year olds saw David Evans who is a regular to the winners enclosure at Windsor saddle his gelding Outback Ruler to take the race from Michael Stouts Impediment by two lengths.
The gelding by Aussie rules certainly turned things upside down as the 14/1 shot stayed on well in the final furlong to take the race under the ride of Shane Kelly, ‘we put a tongue tie on him today that has worked a treat, he has come home really nicely for me.’
A lot of changes on the horse from his previous below par run at Chester last time out, not only on the horse but the surface and distance. ‘He ran at Chester last time out as the owner comes from the area and wanted a runner, we knew the race was a little too short for him, but we gave him a go and Mrs Barnes a day out.' Mentioned the trainer. 'We found out he was having trouble breathing so we have put the tongue tie on him and he has won a little too well tonight really, so we would have to look at running him off that form sooner rather than later, I’d like to go the Chester for the owner again we’ll see.’ Both trainer and jockey mentioning the horse would get the mile and quarter.

The main race of the evening, a six furlongs listed event saw James Fanshaw send his four year old gelding by Equanio to post the 3/1 fav.
The Tin Man ridden by Tom Queally ran on strongly in the final furlong beating David O’Meara’s Watchable who finished a good fifth in the Wokingham at Royal Ascot last year by two lengths. Queally mentioned ‘He hasn’t had the greatest of preparations to the race, but he has come here fit, and will come on a lot for the run, he is a very nice horse.’ The horse owned by Fred Archer racing and indicative started by the trainer’s wife is a horse that could be something special  Royal Ascot being his next objective.
‘I’m relieved to get today out of the way, due to his preparation,’ mentioned the trainer. ‘This is a very nice horse that has been lightly raced, so we are happy to have one of his type in the yard.’ The fourth placed champions sprint race horse possible race for the royal meeting being the Diamond Jubilee Stakes, his preparation right on form to take his goal.
The new initiative at the Royal Berkshire course this season in its 150th year is the sprint series handicap. A nine race qualifier for a £75’000 final held at the course in August.

The first race of the qualifiers being postponed due to the abandonment of the Windsor meeting a few weeks’ back; this race was to be the first race held at the course for the event.

Eleven runners for the race saw local in form trainer Clive cox take the race with his grey gelding Ice Lord by a length from Michael Blanchard’s Stellarta.
Ridden by Adam Kirby who mentioned the ground was just right for horse, his run at Ascot at the beginning of the month on ground a little too quick for the four-year-old.
‘He is a nice horse and has run on for me well in the end, we like this horse a lot and he is an exciting horse for the future.’  Certainly the big prize in late summer could be a goal for this horse if the ground is on the softer side of good, he could be a contender.
The final two races were taken in fine style by Jockey Andrea Atzeni,lying in second place in the jockeys championship to champion jockey Silvestre De Sousa  without a winner for the evening despite his quick dash from the Leicester meeting.
The twenty five year old Sardinian took the maiden auction race on the Marco Botti’s Rockspirit beating the 5/4 fav Hepplewhite ridden by top apprentice Tom Marquand.

The three-year-old gelding by Fastnet Rock looks a very nice type of horse Andrea mentioning,’ he traveled well for me and won his race nicely in the end, he would be a horse that would want a mile and a half really.’ 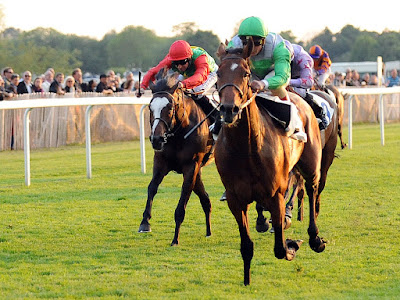 The second of the jockey’s winners was for Charlie Fellowe's on his four-year-old Baadi in the one mile three furlongs Handicap.
The 5/2 fav stayed on well to beat Jamie Spencer on Zambeasy by three quarters of a length. All horses in the last electing to spread the width of the Windsor track to find the better going.

The gelding by Dansili already a winner at the track taking a maiden race a few weeks back seemed to relish the quicker ground,
'we were a bit concerned about the going but Andrea mentioned he had handled the going better that he did a few weeks ago here, so as long as it was not too firm we wouldn’t mind running him on such a surface.’
The trainer also mentioned that he thought the horse may be looking for a longer trip in distance.
‘ I haven’t looked past today with him and he is still on a  learning curve, but we have found out more about him today, he  is a horse that will never win by a big margin, but a nice horse all the same.’
A horse that will always make you ride on the seat of your pants as a backer, but a nice improving sort to boot and would be one to jot down in the note books as a one to follow.
WWW.MJAYPHOTOGRAPHY.CO.UK
Posted by mjayphotography at 05:39 1 comment: