DETTORI TREBLE AND ONLY MONDAY

As summer racing draws to a close for Monday racing at Royal Windsor racecourse, the maestro strikes up the band for one final tune.
Frankie Dettori, with a good book of rides for the afternoon, shows just why he is the punter favourite.

The first race of the eight race bumper card at the Berkshire racecourse, saw the Italian take the even money favourite to post in Heroic Heart trained by John Gosden. But it was the Roger Charlton trained Quick March who carried away this division 1 of the maiden fillies race over the six furlongs.

This two year old filly by Lawman, owned and bred by Lord and Lady Rothschild beat her field well when taking the race by five lengths, showing progression for her third place at Goodwood nine days previous.
In form Harry Bentley was meant to be in the saddle, but unable to take the ride. David Probert took the mount, and a lucky spare ride it was to.


Probert quickly finished off the divided maiden by taking 7/2 shot Sunflower to post for trainer and ambassador to Windsor racecourse Andrew Balding. This chestnut filly by Dutch art with her debut on the sun drenched racecourse, took up the race at the furlong marker and held on by a neck from the Willie Haggas trained Gravity Flow. The two year old learning her trade and if well enough coming out from this race will take her chances again before the season comes to the end, and looks a type that would improve in time. 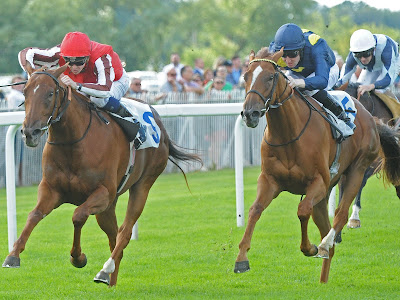 Another maiden on the card this time over the Windsor mile, fourteen runners went to post.
Dettori on the 13/8 favourite Four On Eight, trained by Luca Cumani bought the Lawman colt home by two lengths, again for a owner/breeder combination Stuart Stuckey. Taking the race from best of Oregon ridden by fellow Italian Antonio Fresu.
The two year old out of a Pivotal mare finished third in a Severn furlong contest at Newmarket last month, a race that also saw the horse behind Four On Eight on that day take honours at Ascot at the weekend, so the form is encouraging.
Owner Stuckey, who regularly uses the services of Dettori was promised a flying dismount if the horse came up trumps, and the promise was kept. 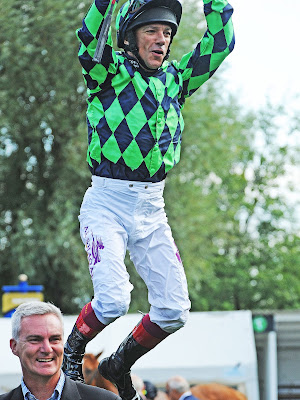 Posted by mjayphotography at 21:09 No comments: